Don’t Be A Jerk (to Yourself) 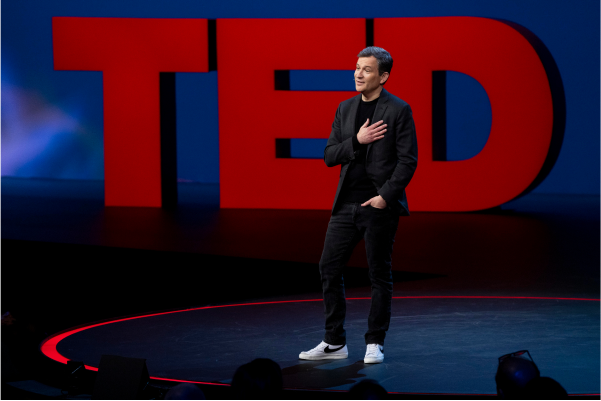 Editor’s Note: This week’s Deep Read is excerpted from Dan’s new TED talk, “The Benefits of Not Being a Jerk to Yourself,” which you can watch here.

A few years ago, I signed up for something called a 360 Review, which is an anonymous survey of your friends and colleagues to get a panoramic sense of your strengths and weaknesses. I opted for the colonoscopy version, which also included my wife, my brother and two of my meditation teachers.

Why?  Because after three years of meditating regularly, I wanted to get a sense of whether my inner work was having outer results.  Was meditation making me a better person, or just helping me feel less stressed inside?

Well, I got a big surprise.  After 13 pages were dedicated to my positive qualities, I got 26 pages of Beat Down. I was called rude, emotionally guarded, a diva, and an authoritarian. Some people even questioned my motives for promoting meditation. It got so bad that at one point my wife, who was reading it with me, got up and went to the bathroom to cry.

For me, the most painful part was realizing that the aspects of my personality that I had most tried to hide – especially anger and self-centeredness – were in fact on full display. Meditation had helped, but I still had the capacity to be a schmuck.

I am not alone in having these demons, of course. Lately, all kinds of bad behavior have been on the rise: reckless driving, unruly airline passengers, violent crime, online bullying, tribal antagonism, even general self-centeredness. At times, it can really feel like our social fabric is unraveling. What can be done?

After my 360, I decided to learn some practices that could help me be a better person, and, by extension, might help the rest of humanity as well.  I pulled every lever at my disposal: psychotherapy, communications coaching, bias training, couples counseling, and much more. Perhaps most impactful was a nine-day silent retreat where I practiced loving-kindness meditation, which has been shown in studies to boost your capacity for warmth.

At first, though, I kept getting tripped up. My teacher, Spring Washam, kept insisting that if I wanted to be less of a jerk to other people, I needed to start by being less of a jerk to myself, which I thought was the kind of thing you hear from Instagram influencers and spin instructors. She even went so far as to suggest that when I saw my demons emerging in meditation, I should put my hand on my heart and say to myself, “It's okay, sweetie. I'm here for you.”

Hard pass, I thought to myself. I am not going to do that.

Over the ensuing days of nonstop meditation, however, I noticed something very strange. On the one hand, my twin demons were in full effect. My anger had me rehearsing glorious, expletive-filled speeches I would deliver to my (former) boss about the various promotions I deserved. My self-centeredness had me writing my own five-star Amazon reviews for my books, praising my elegant prose and rugged good looks.

Yet at the same time, I was berating myself for having those demons and being a self-obsessed, cranky monster. The 360 was right - I was a jerk.

Finally, after five or six days of drinking from this firehose, I caved. Mid-meditation, I put my hand on my heart, and while I did not call myself sweetie, I did silently say to myself, “It's all good, dude. I know this sucks, but I've got you.”

Awkward as it was, I had an epiphany. I realized that I didn’t have to fight my demons or hate myself for having them. They were ancient, fear based, neurotic programs, probably injected into me by the culture and by my parents, and that, actually, they were trying to help protect me. And when I stopped fighting them, they actually calmed down for a few seconds, making it a lot easier to just let them be, instead of acting out.

I didn't have to slay my demons. As meditation teacher La Sarmiento puts it, I just had to give them a high five.

Since that retreat, I’ve found that this radical disarmament is the key, at least for me, to being a better person. Fighting and repressing my demons didn’t work; that just made it harder to keep them bottled up, as I had clearly failed to do. But high-fiving them, even loving them, enabled me to be more open, relaxed, and available in my relationships with others. That became a kind of self-reinforcing loop which I describe in the TED talk, complete with extremely cheesy charts hand-drawn by yours truly.

I call this whole process “Me, A Love Story.” That’s a deliberately ridiculous term, but I’m serious about the word “love.”  I consider love to be anything that falls within the human capacity to care, a capacity wired deeply into us via evolution. It's that ability to care, cooperate and communicate that has allowed homo sapiens to thrive. And it is a lack of love that I think is at the root of our most pressing problems, from inequality to violence to the climate crisis.

Obviously, these are all massive problems that are going to require massive structural change, but at a baseline, they all require us to care about one another. And it is harder to do that when you're stuck in a ceaseless spiral of self-centered self-flagellation. So I guess what I'm trying to say here is there's a geopolitical case for you to get your s--t together.

The empowering news here is that love is not an unalterable factory setting. It is a skill that you can train. In the talk, I go into two ways to do that: practicing loving-kindness meditation and consciously counterprogramming against your inner critic. So check there for more. Of course, we teach both of these in the Ten Percent app as well.

Recently, three years after my first 360, I got a second one, and the results were very different. People gushed about how much I had changed as a friend, mentor and colleague. They talked about meetings where I used to be a prosecutor and was now “delightful.” One person said “his ego is shrinking,” which I think was a compliment. Another said “he's finding his heart,” which the New Me let pass.

To be sure, I still fall down – often.  And I know that cultivating self-care and self-compassion cuts against the never-enough-ness that society seems to want us to feel. It can also be hard to look at your demons.

But when you learn to high-five those demons, instead of trying to fight them, they don't own you as much.  You become more generous and more available. Or as my wife put it after reading the results of the second 360, “Congratulations, now you’re boring.”

I’ll let that pass as well.