In Defense of Grudges 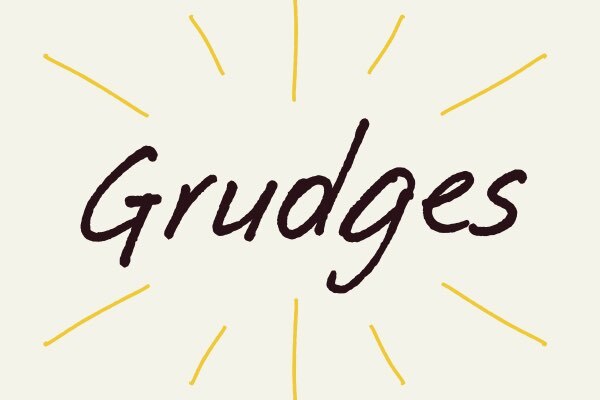 Grudges generally get a bad rap.  And for good reason – holding onto resentments can be toxic, trapping us in cycles of anger or bitterness.

And yet, all of us have grudges, no matter how much we’re told not to.  What if there were a way to allow them to exist, maybe even to learn with them?

That’s the subject of the newest episode of More Than a Feeling: relating to our grudges in a better, healthier way. As part of that episode, I talked with Sophie Hannah, author of How To Hold a Grudge: From Resentment to Contentment, The Power of Grudges to Transform Your Life.  I started by asking her for a basic definition.

“My definition of a grudge is different from the dictionary definition,” Sophie said, “which is usually about a feeling of resentment or bitterness. For me, a grudge is not a feeling. At first, after the grudge-sparking incident occurs, we may feel furious or wounded or whatever. But if we process those feelings in the right way and give ourselves permission to hold a grudge, it becomes a sort of symbolic object that reminds you of what happened and what you learned from it.”

So, there’s the incident that makes you feel a certain way – annoyed, wronged, betrayed. Then you let yourself recognize all of those feelings and what caused them.  You work through it. And then what you are left with in the end, is what Sophie calls a “good grudge.” It’s been cleaned of all its stains and smells, and shined up as a little keepsake. That’s the symbolic object: the marker of what happened… and the work you did to think it through.

“I imagine grudges as being like little jewels in nice boxes with ribbons around them,” Sophie told me. “However painful those incidents were that gave you the grudges, it's a part of your life experience that only happened to you. So you can ask: How can I use the fact that it happened to make what comes next in my life even better?”

To help foster this perspective, Sophie created “The Grudge-Fold Path.”  (Some of you might recognize the reference to the Buddhist Eight-Fold Path.)  The first step, she says, is giving ourselves permission to hold a grudge and have those negative feelings. In fact, you can even have a bunch of grudges – but selectively. So keep a budget, or Grudget.

Then, to help process your grudge, write down the facts of what happened during the grudge-worthy incident. Not your feelings about it, just the tick-tock of events.  Ask yourself questions like: How serious was the overall situation? And would my feelings around the  grudge change if I got a heartfelt apology?

The point is not to hang on to the negative feelings, but to identify what you learned from what happened. It may even reaffirm your own value system, of how you need to be treated and how you treat others.

Finally, when you’ve got a grudge that no longer gives you such a charge of negative feelings, you can polish it up and put it in what Sophie calls your “Grudge Cabinet,” alongside your collection of other precious grudges.

“Of course, this is totally made up,” Sophie told me.  “But it can be a very real thing for us. If we allow ourselves to hold grudges in this way, it enables us to continue happily in relationships with flawed people, both protecting ourselves and not feeling loads of hostility towards them.”

Now, Sophie warns against agitating your grudge. If you begin to identify with feelings of being wronged, then it’s hard to move on, and you’re in danger of having a toxic grudge.  But the flip side, according to Sophie, is that holding grudges, and tending to them and to yourself, can actually make you a more forgiving person.

“Once we allow ourselves to take our grudges seriously, and stop trying to tell ourselves that we ought to not mind the things that we in fact do mind,” she said, “then we're being much kinder and more validating of ourselves.  And the minute we treat ourselves better, we want to be equally generous to other people.”

Intrigued?  On More Than A Feeling, I put the Grudge-Fold Path into practice, working with Sophie to process an incident when someone ghosted me unexpectedly. I’ve been holding onto my grudge for years, but I found out that actually, I still haven’t fully processed what happened.  Check out the episode to hear what happened next…

Yasmeen Khan is a senior reporter for More Than a Feeling. She was also the host and managing editor of Childproof, Ten Percent Happier’s podcast focused on parenting. She was a public radio journalist for nearly 15 years, at WNYC Radio in New York and before that at North Carolina Public Radio.