The Dalai Lama’s Guide to Happiness 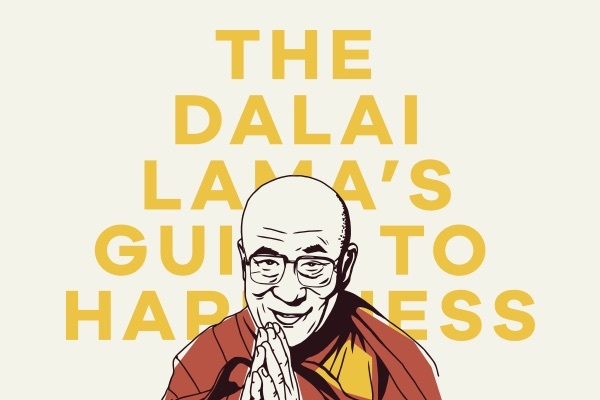 Last fall, I traveled seven thousand miles to Dharamsala, in northern India's Kangra Valley, to a place that has been home since 1959 to one of the most recognizable human beings on the planet: the Dalai Lama. For decades, His Holiness, as the Dalai Lama is called, has been working with Western neuroscientists, combining ancient wisdom practices with modern science to study what really works to make us happy.

The headline of this extraordinary conversation between ancient Buddhist wisdom and modern science is that the brain and the mind are trainable; that happiness is not an unalterable factory setting. It's actually a skill.

And, in our new ten-session course, The Dalai Lama’s Guide to Happiness, we’re going to train you in it, together with Dr. Richard Davidson, the foremost neuroscientist in the world studying the impact of meditation on the brain, and Roshi Joan Halifax, the renowned American Zen Buddhist teacher.

The first step is recognizing that our minds have the power to reflect on themselves, and to grow.

This, said Dr. Davidson, is one of the crucial points of meditation: that we have the ability to notice our thoughts and not be carried away by them so much.

“One of the key attributes that we cultivate during simple mindfulness practices,” said Dr. Davidson, “is what scientists call meta-awareness. Meta-awareness is being aware of what it is that we're doing. If we're not aware of what it is that's happening in our mind, how can we change it? So this kind of awareness is really crucial, and there's quite a lot of research now. You know, at least 50 good scientific studies that show that meta-awareness really can be strengthened through simple mindfulness practices.”

This is an important point, because many people think that when they get distracted in meditation, that they have failed. But that is not a failure. Distraction is a part of meditation. Every time you get distracted, which will happen a million times, you just start again and again and again. And this is like a bicep curl for your brain.

“If we can see these thoughts and feelings for what they are, which is temporary, they're not who we are, then we can be less hijacked by them,” said Dr. Davidson.  “We are less likely to be pulled like a kind of rudderless sailboat on a turbulent ocean through these simple kinds of meditation practices. And that is a really important key to our happiness.”

The second element that the Dalai Lama came back to again and again in our interviews is warmheartedness.

“Warmheartedness is the key factor for a happy life. And on this planet, there are lots of problems, mainly [caused by] selfishness. A more altruistic mind brings more happiness.”

Surprisingly, this altruism can in fact be in your self-interest.

The Dalai Lama told me that acting in a “more compassionate way to others is the best way to fulfill your own interest... I, myself, practice altruism daily.  That brings me inner peace, also inner strength and including sleep well. So you see, it is quite wise selfishness.”

I asked Dr. Davidson how this works.

“This is how we are wired,” he said.  “Focusing on others as the Dalai Lama often teaches and as research shows, is actually something that is better for our happiness than focusing on ourselves… Simple practices for lovingkindness and compassion can produce measurable changes very, very quickly. Literally in a matter of minutes. And it suggests that it's really part of our nature.”

The best part here is that, like happiness, compassion is a skill you can train through meditation.  And, in the course, we teach you how to do exactly that. Intrigued?

Sign up for The Dalai Lama’s Guide to Happiness and put these ideas into practice.