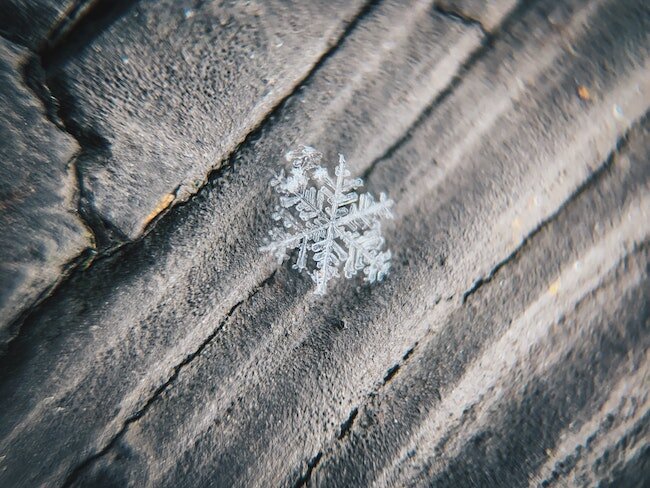 There is a Chinese Buddhist kongan – rather like a Zen koan – in which a figure known as Layman Pang points to the falling snow and says, “Good snowflakes: they don’t fall anywhere else.”

I’ve always been struck by this remark, and meditated on it for many years. As with all kongans, it is an example of the distinction between showing and telling. When Pang says, “Good snowflakes: they don’t fall anywhere else,” he’s showing us something. It doesn’t require an explanation. To explain it would be to tell what it means, rather than to allow the image to speak for itself. And that image is something you can then attend to and ponder, allowing it to come alive in a way that may be surprising and revealing.

For me, this kongan evokes a very fundamental sense of this world in which we find ourselves: this world into which we were thrown at birth, of which we gradually grew aware as our consciousness and language became more refined, as we began to emerge as a distinct person with a coherent history, the sense of a future, and a foreboding about our own death.

I’m not a scientist and have not been trained in the sciences. Yet today when I read popular books, listen to a radio program or watch documentaries about the discoveries of the natural sciences, it often evokes feelings that might best be described as religious. I find the sheer scale and vastness of space and time overwhelming. And I become acutely aware of the poignancy, the utter contingency of existence.

Contingency means that, on the one hand, something arises contingent on other conditions, which, in turn, are contingent on yet other conditions, ad infinitum. “Good snowflakes: they don’t fall anywhere else” is one way to understand this teaching. This very concrete, vivid image from the natural world, taking place at a specific moment in time, shows us contingency. There’s something unique and utterly specific in each of these ephemeral crystallizations of water, contingent on certain temperatures and weather conditions, that fall from the sky, come to rest, and finally dissolve back into water and disappear.

All this occurs in a world that is shot through with contingency, flux and poignancy. It all ‘started’ with the so-called Big Bang or, more correctly, a ‘singularity,’ that is impossible to imagine. In a way that is beyond anything I can conceptually grasp, everything that we experience now, every little atom, every blade of grass, every breath we take, would not have occurred – would not be occurring – had this singularity not erupted and generated this universe.

And when we think of the billions of galaxies that make up the universe, we find that we live in one tiny little solar system within one galaxy, the Milky Way, which is likewise made up of billions of other solar systems. When I try to get my mind around the numbers and distances involved, it is simply too much – you just can’t do it. It brings the mind to a stop.

In this extraordinary universe, we are just tumbling little snowflakes existing for a flash of time: fifty, sixty, seventy years, which in the grand scheme of things is really nothing. And yet here we are. In terms of the cosmic timeframe, we are latecomers on the scene. And how long we will manage to remain here is anyone’s guess.

The fact that all of this has happened seems entirely accidental and arbitrary. This is difficult for human beings to accept. We like to tell ourselves stories that explain how special we are. We invent concepts like ‘God’ to show how the story of life on earth was designed in such a way that would culminate in humankind. We have an instinctive sense that we’re so much more than just a pure accident, that there must be some reason for our being here.

Or, if not God, then perhaps karma, which attempts to explain how over countless lifetimes we have been reaping the results of our previous actions that lead us to getting born in one place rather than another, and as one kind of creature rather than another. This too explains why we exist; it provides reasons that we can get our heads around. It makes us feel that we are meant to be here.

But the natural sciences simply don’t back that up. We have emerged, it appears, out of purely physical conditions by random mutations and chance. We’ve come into being entirely dependent upon the distant causes of evolution and the more proximate causes of our respective parents’ reproductive cells. We are as contingent as a snowflake.

And yet the curious thing is we take this so totally for granted. We regard our own existence as an unavoidable given, something that we often feel disinterested in or bored about. We wake up in the morning without giving a moment’s thought to the extraordinary combination of events that have produced us, and say to ourselves: “Oh shit. Me again. What’s on Netflix tonight?”

This is a very odd way to attend to something that is so mind-bogglingly weird.

Meditation invites us back. Just sitting down and experiencing the breath, experiencing the body, returning to the immediacy of life itself allow us to open ourselves to what we might call the ‘everyday sublime’. Because it’s not just starry heavens and violent storms that are sublime. When your mind becomes more still, when you become more present, when the habits of your neurotic thinking die down, all this will allow you to perceive the sublimity of the most simple, ordinary things.

“Good snowflakes – they don’t fall anywhere else.” A single snowflake is just as sublime as the Milky Way. It is quite remarkable that you are here. Stilling and sharpening attention allows an intimacy with ordinary things that reveals how extraordinary they are.

Stephen Batchelor is a renowned Buddhist teacher and writer, known for his secular and scholarly approach to Buddhism. He has written numerous books including the best-selling Buddhism Without Beliefs and most recently, What is This? Ancient Questions for Modern Minds.